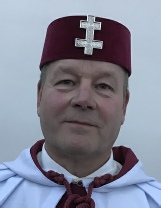 In all, Seventy-Five Knights were present to witness the installation of Brother Kt. Andrew Gavin Barden as a member of our Order.

The Preceptory was consecrated at Keynsham on the 3rd June 1975. The ceremony was conducted by the  Provincial Prior, V.E.Kt.W.B.Clatworthy K.C.T., assisted by officers of Great Priory and of Provincial Priory.

The Preceptory is named after St. Keyna, a British Saint who lived in the 6th century A.D. the daughter of a Welsh Prince, we are told that she left home seeking peace and contentment, and eventually settled at the spot now known as Keynsham. Legend informs us that she found the people there troubled greatly by poisonous serpents and, grasping one of these firmly in both hands, she beseeched the Lord to rid the surrounding countryside of this menace. In answer to her plea the serpents were turned into stones, and this is said to account for the many ammonites to be found in the lias rocks even to this day.

The Preceptory banner was dedicated by the Very Eminent Provincial Prior on the 3rd June 1980. The banner depicts St. Keyna clasping a serpent, and the origin of its design is to be found in a small piece of material, about 1.5 inches square, which was discovered in a room at the Keynsham Masonic Hall.

© Copyright of the Provincial Priory of Somerset 2017

Officers are requested to inform the Marshal if they are unable to be present and undertake their duties at the meeting.

Details regarding the rehearsal will  be advised

Dining arrangements will be made for all Knights who return the Reservation Slip together with the appropriate payment not later than seven days before the meeting.

Meals booked and not taken WILL be charged.

The ceremony was conducted in a most splendid manner by the Eminent Prior assisted by his Officers. The REPP conferred the accolade and the Address was ably delivered by E.Kt.Creech, E.Kt.Jones, E.Kt.Parks and E.Kt.Sheppard.

Bro.Kt.Smith also receieved his patent from the REPP. 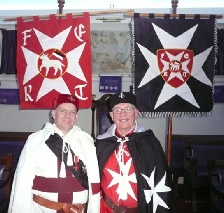 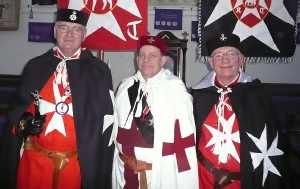 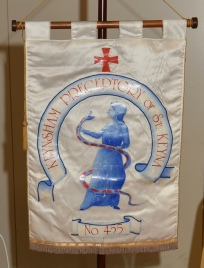